Unseating Amazon: What Will the Next Great Retail Company Look Like? 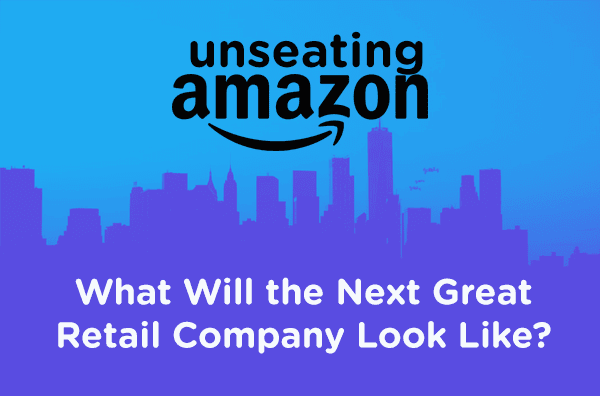 “Amazon is not too big to fail,” he said. “In fact, I predict one day Amazon will fail. Amazon will go bankrupt. If you look at large companies, their lifespans tend to be 30-plus years, not a hundred-plus years.” 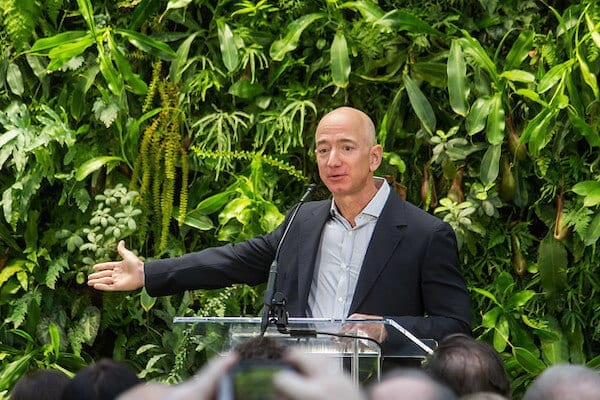 While his remarks were meant to inspire employees to remain focused on the mission at hand, they also underscore the reality that Amazon’s continued dominance is anything but a fait accompli.

According to reports, about 49 cents out of every e-commerce dollar in the U.S. is spent on the site. The company employs more than 550,000 people, and generates $178 billion in annual revenue. And last year they became only the second American company to reach a trillion dollar market valuation.

But that doesn’t mean they can’t be beaten. It’s easy to forget that Amazon’s dominance wasn’t always a given. Remember, Amazon started out in a garage…selling books.

To be clear – it’s not that I think Amazon needs to go. Amazon became the Amazon we know today by delivering unparalleled customer experiences. They didn’t just predict, but made possible the mainstream adoption of online shopping by doing things that were previously thought impossible – same-day delivery, one-click shopping, and personalized recommendations.

But at one point, they were the little guys, with a radically customer-centric approach that would disrupt retail as we know it. And just as Amazon refigured the retail landscape over the past two decades, there will be another company with an equally bold and disruptive vision, who can move nimbly and beat the giants at their own game.

Here are four things this company may need to do to unseat Amazon as retail’s dominant player.

If there’s anything I’ve learned from leading SnackNation is that people want more connection, not less.

It’s a huge reason why businesses like SoulCycle and WeWork (now The We Company) have been so successful. They tapped into our innate desire for community and real life experiences.

Amazon was of course correct that convenience is a major driver of consumer behavior, but human connection is arguably just as strong a driver, and let’s face it, online shopping is a lonely experience.

Amazon itself is ceding this need for genuine connection. After years of denying that it would ever get into brick and mortar, Amazon has several flagship retail projects – Amazon Go, Amazon Bookstores, and pop-up shops for their Kindles, Alexas, and other devices.

I believe it’s a primary reason why Amazon acquired Whole Foods. Whole Foods has done a masterful job of creating an experience that draws people in, reimagining the grocery store as a place where people actually want to spend time, instead of place people can’t wait to get out of (or avoid altogether).

To paraphrase Warby Parker’s David Gilboa, retail isn’t dead, mediocre retail experiences are dead. The company that unseats Amazon will give people a reason to come together and connect in real life.

It might sound strange, but Amazon is not what I would call a “shoppable” site. It’s more of a search engine disguised as a storefront. Very often, unless you know exactly what you’re looking for, it takes some digging to find it.

Generic searches surface the products with the best – and most – reviews, creating a systemic bias towards older products that have been on the site for years. (Let’s also not forget that wherever there is an algorithm, there will be someone trying to game the system.)

But what if you don’t know what you want until you see it? What if you’re only interested in the newest, leading-edge brands and products, not the products that have 10k+ reviews and have been top-sellers since 2007? Amazon usually isn’t your first stop.

This need for discovery is a big driver for the the rise of curated experiences like Stitch Fix, Warby Parker, and yes, SnackNation. The company that can reintroduce excitement to online shopping by scaling discoverability through curation will have a huge advantage.

Discovery is also driving new channels that seek out consumers where they already are. The next big retailer won’t just have physical brick and mortar and online D2C, but will also be able to provide retail-like experiences wherever the consumer is – gyms, offices, festivals, co-working spaces, rideshare vehicles, etc. It’s what CB Insights called a “post-storefront world,” where “new points of sale integrate with daily experiences.”

3. Reintroduce the Right Kind of Friction

It has been long assumed that consumers want frictionless experiences. The fewer barriers between purchase intent and purchase, the better.

Amazon reduced the friction to nearly zero with one-click shopping. Now they’ve done the same in physical retail with Amazon Go. At Amazon Go, consumers scan into the store with their phones, pick items off the shelf, and simply walk out the door. Sensors and camera technology track their purchases and automatically charge their Amazon account. There are no cashiers and no lines. It’s basically one click-shopping in real life.

I do think that Amazon Go’s technology will be ubiquitous in the near future, but only in certain contexts. It’s great for the convenience store setting, where people really do just want to grab and go. But for other types of retail, people do want to slow down, experience products, and interact with experts or peers.

I’m not saying that consumers are dying to wait in lines or be hassled by sales people. I’m saying that as the novelty of the Amazon Go experience wears off, consumers will find the experience a bit lifeless. It seems counter intuitive, but consumers actually want a bit of friction, and the next Amazon will figure out how to find that balance.

I think about brand a lot at SnackNation. I co-host the Brand Builder podcast, and one of the SnackNation’s missions is to truly understand and support the brands that are making a difference to help change our food system.

I actually think that while Amazon’s brand is undoubtedly strong, it’s based mostly on the utility of their service. People don’t connect to Amazon on an emotional level. It doesn’t speak to the core of their identity – who their customers are and want to become – like the best brands do.

Jeff Bezos is famous for saying, “Our customers are loyal to us right up until the second somebody offers them a better service.” Within the framework of Amazon’s culture, that’s a good thing. It motivates the company to vigilantly deliver exceptional customer experiences.

But this does speak to the brand’s fundamental vulnerability. A company that can execute to the same degree as Amazon, and has an emotionally resonant brand will have a built-in advantage.

What do you think? What will it take to unseat Amazon? Let me know in the comments.

Why Now is the Time to Invest in Workplace Experience

5 New Focus Tips You Can Try This Week