Episode 129 | The Surprising Secret to Success in Brick & Mortar Retail 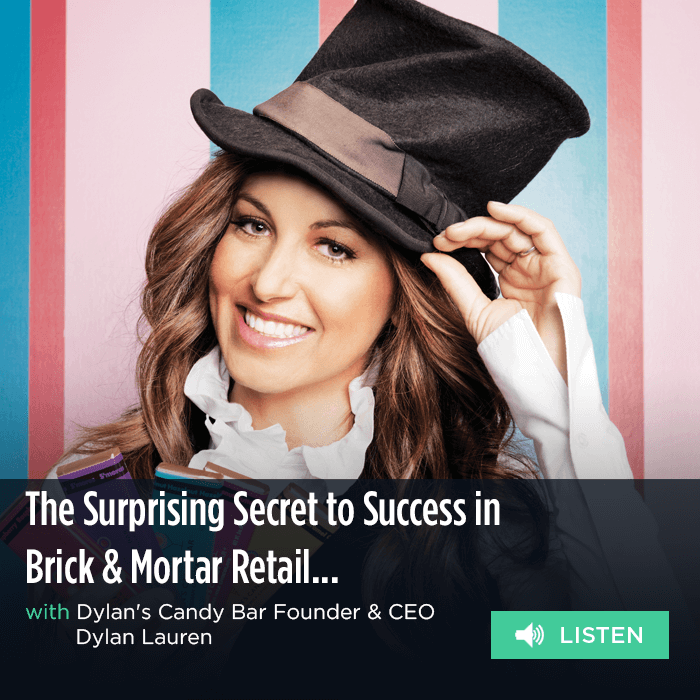 If you were only paying attention to the headlines, you’d be forgiven if you thought that the future of brick and mortar retail is a bleak one.

But brick and mortar isn’t dead – far from it. In fact, with digital-first players like Amazon getting in the game, pop-ups popping up left and right, and 8-figure investments in places like The Beverly Center in Los Angeles and Hudson Yards in New York, one could argue that we’re in a bit of a retail resurgence.

Still, retail strategy remains a sticking point for most brands. To help us uncover the secrets of brick and mortar success, we talk to Dylan Lauren, the CEO & Founder of Dylan’s Candy Bar.

Why Dylan? Because Dylan’s Candy Bar launched in 2001, and has thrived during this entire period of disruption and change.

Dylan’s Candy Bar is the largest confectionery emporium in the world with over 20 locations worldwide, including a new location in Hawaii. Their flagship NYC store is a cross between FAO Schwarz, Willy Wonka’s Chocolate factory, and Disneyland.

We also learn why Dylan conceives of the brand as a fusion of art, fashion, and lifestyle, plus the top lesson learned from her father, the iconic fashion designer Ralph Lauren.

What’s your biggest takeaway from the episode? Join our invite-only, private Facebook group just for Brand Builder Community members, where you can connect with fellow entrepreneurs and founders, crowdsource ideas, share best practices (or lessons learned), and get your most important questions answered. Join now!

★ 63 Unique Gifts For Employees That Will Boost Morale In 2020

★ 30 Essential HR Blogs Every HR Professional Should Read in 2020

Episode 148 | How to Save a Keystone Species…By Eating It, with GOODFISH co-founder Justin Guilbert