Episode 97 | How Ka-Pop! Applies the Lessons of Big CPG to Raise Money, Scale Quickly, and Become a Hit with Consumers

Episode 97 | How Ka-Pop! Applies the Lessons of Big CPG to Raise Money, Scale Quickly, and Become a Hit with Consumers, 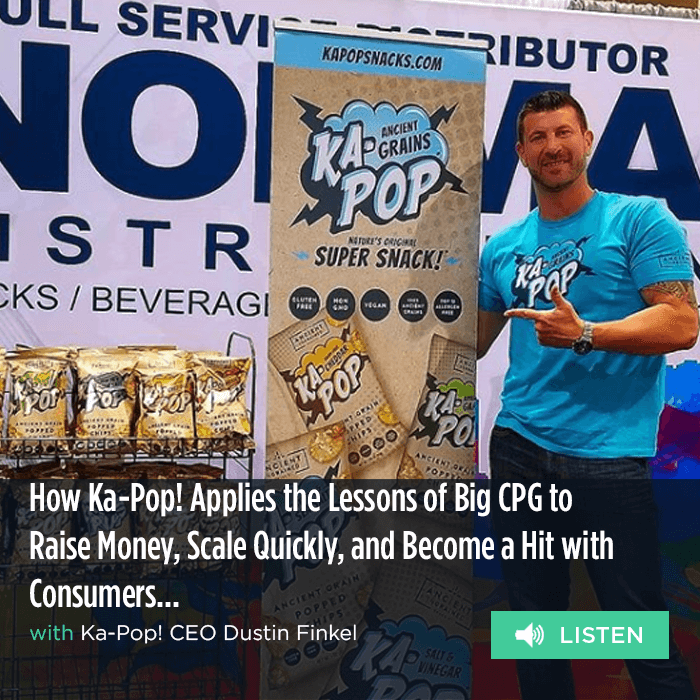 What if you could take 15 years of CPG experience, distill it down in a 30 minute podcast interview – would you be interested?

If you said yes, you’re in luck, because that’s precisely what’s on deck on this week’s Brand Builder.

We interview Dustin Finkel, the CEO at the Ancient inGRAINed Snack Co., makers of Ka-Pop! snacks.

Dustin is a 15+ year veteran of the CPG business. He’s got an MBA from Northwestern, and he’s an adjunct professor at the University of Colorado at Boulder.

But With Ka-Pop – it’s the first time he’s started his own brand, and he was surprised by how much he still had to learn. He told us that if he’s struggling with these things, he know there are other entrepreneurs who need help with this stuff too. He’s all about paying it forward and giving back.

Ka-pop is a popped chip made from ancient grains. It’s made with clean ingredients, it tastes great, contains omega 3s, and has a great brand to support it.