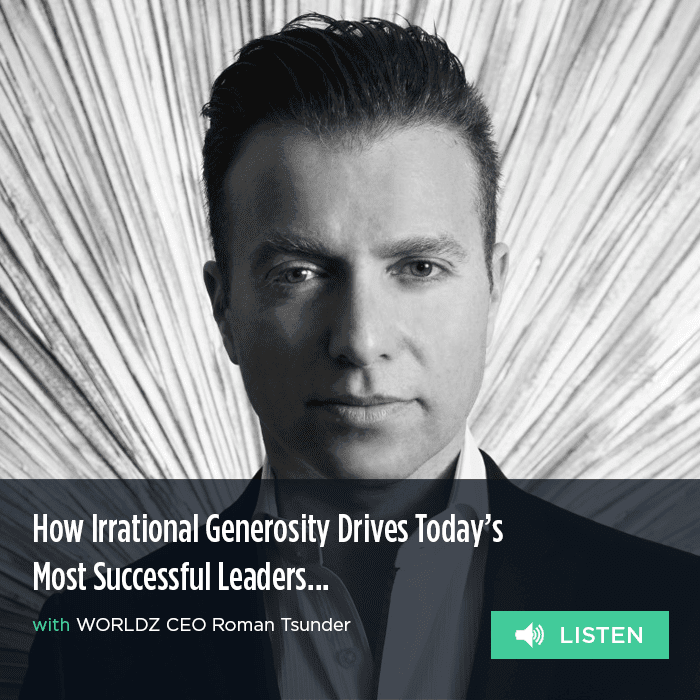 This week we have a special bonus episode. We’re releasing one of our favorite interviews featuring Roman Tsunder, the mastermind behind WORLDZ and PTTOW.

If you haven’t heard, WORLDZ is a global summit that unites tomorrow’s leaders with CEOs, CMOs & cultural icons to create the world of tomorrow.

As you’ll hear in the conversation between Roman and SnackNation CEO Sean Kelly, the driving force for Roman has been his belief in what he calls “irrational generosity.” It’s something he’s experienced personally in the most successful leaders, and that he believes is actually the key to their success.

This is a deep, seriously inspiring conversation that you don’t want to miss. Not to mention that this content is especially timely because WORLDZ 2018 is less than a week away! This year the summit will feature leaders from top brands like Amazon, Google, Hulu, Samsung, VICE media, Marvel and so many more – plus keynotes from everyone from Senator Barbara Boxer, to Rose McGowan, to the RZA.

And don’t miss a joint Master Course on Culture taught by SnackNation CEO Sean Kelly and RXBAR CEO Peter Rahal. If that weren’t enough – Brand Builder will be on the floor at WORLDZ this year, recording conversations with all the inspiring leaders at the show.